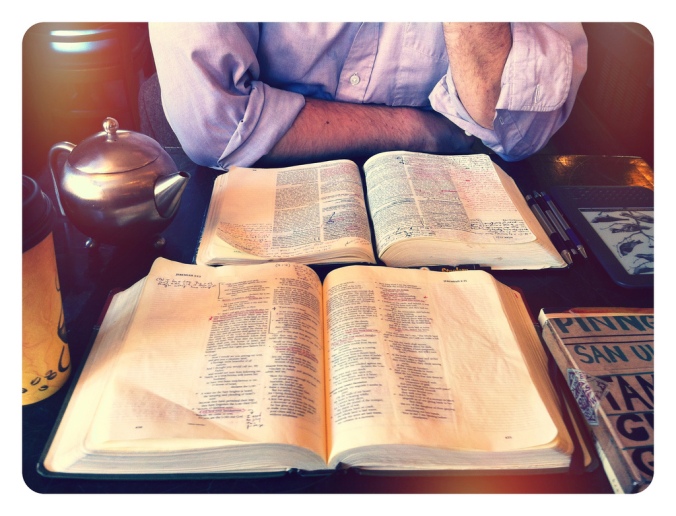 This post is part of our on-going series about Male Feminist Theology.

When we last met, I tried to lay out a theology of the Bible that makes sense when we take into account the experiences of women–an experience that is marginalized, embodied, and connected to the earth itself. When you do that, you realize that a top-down understanding of the Bible is inadequate. The way God reveals himself is primarily from the bottom-up.  And that is how we should see the Bible–not as a divine dispatch from the heavens, but as an emerging reality out of the embodied, painful reality of human existence.

My argument was that the top-down idea that God spoke from on high and people wrote down his words in the Bible, is actually a patriarchal view that concentrates power and knowledge at the top and restricts it only to those with the privilege of being “in the know”.

Whether you agree with all that or not, there’s actually a bigger elephant in the room than our theological ideas about the Bible: the actual contents of the Bible itself. If you want to be sensitive to the realities of women in the world, what should you do when you approach passages (both Old Testament and New!) that disregard, demean, and disempower women?

There are commonly two ways that that the “hard parts” of the Bible are read by feminists, egalitarians, and those agreeing with the full participation of women in all parts of the church.

The first one, associated with “liberal” and “progressive” theologians, simply disagrees with what the Bible says. They would say that the conservative view of how to understand and translate certain texts is actually correct. The Bible itself does not see women as full structural equals as men. Jesus really couldn’t imagine having women as teachers. Paul really is denying women a place in the Church.

But, they would say, the Bible also says lots of thing that we’ve come to realize aren’t the case (scientifically, historically, practically, etc.).The Bible is simply a product of its (patriarchal) culture, and we need to be sensitive to how the Spirit is guiding us and not cling unnecessarily to harmful cultural ideas the original writers had. Yes, Paul didn’t want women to exercise authority in church. And he was wrong. You can say that and still be a Bible-believing Christian. It’s okay.

The second path–the one I’ve historically ascribed to–tries to argue that the Bible (at least the New Testament) is itself supportive of egalitarian views that allow women to teach and exercise authority in the church. Jesus and Paul weren’t wrong in this case, we’ve just been reading the text wrongly for a while now. As we’ve grown in our knowledge about historical context and translation, and as other voices have interpreted the text, we see more clearly how the New testament has every expectation that women would be full participants in every part of the church.

I have gone to pains to fight for this second path. To “defend” the Bible as it were and say that you can be biblically-faithful with a “conservative” view of the Bible and still walk away agreeing with women doing authoritative things in churches.

But what if I’m doing it all wrong?

Personally, I think the way most American Conservative Evangelicals read the Bible is not correct. Too many treat the Bible almost as a god in of itself, as if it is holy, sacred, perfect in all its attributes with nary a mark of human weakness or finitude in its pages. This puts the Bible on a pedestal on which it doesn’t even put itself (and no, when the Bible talks about God’s “word”, “law”, or “statutes”, it is not mainly talking about written Scriptures. But that’s a discussion for another day).

I’ve come to a place where I’ve realized that when the Bible talks about historical stuff, science, and many religious practices, it’s acting as a product of its culture. The biblical writers wouldn’t have known about a super-old earth or the findings of modern science and archaeology, so I wouldn’t expect them to put that in the Bible. When they write stories and histories, they are doing so more as artists than documentarians.

The Bible is indeed the primary place through which God breathes and shows us who he is, but it is a human text written by humans, for humans. And these humans had certain cultural and historical presuppositions that made their way into the Bible. And that’s okay.

(Do you see my problem yet?)

When it comes to nearly every other aspect of the Bible’s contents, I have that “flexible” view that sounds a lot like those theological “liberals” and “progressives” above. But when it comes to this issue of the Bible and Women, I suddenly start talking like a Fundamentalist Conservative Evangelical. I find myself thinking:

“Surely, the Bible couldn’t be ‘wrong’ about this topic! It HAS to be supportive of women in all aspects for it to TRULY be the Word of God! If that falls, where does that leave us!?”

And yet, I fight so hard against people with those exact same thoughts when it comes to history, science, authorship, and so many other aspects of biblical scholarship.

I still don’t know. This has been a really hard post to write. I am still of the opinion that the New Testament is in favor of women leaders in the church and that it is fundamentally an egalitarian document. But I admit, I sometimes feel like I’m jumping through hoops and doing mental gymnastics just to support this idea. Am I twisting Scripture to support an idea I’ve arrived at due to other non-biblical factors?

I don’t have any firm or final conclusions about this, but I have a few things that have helped me think through this more clearly, even as I continue to wrestle. I’ll post those tomorrow.

But in the meantime, what do you think? If you believe in women’s ordination, which view of the Bible would you ascribe to? Why or why not?

UP NEXT: Oh no! What’s a Feminist Fundamentalist to Do?

Enjoy the Post? Leave a tip with Square Cash!

6 thoughts on “A Male Feminist Wrestles with the Bible (come watch!)”