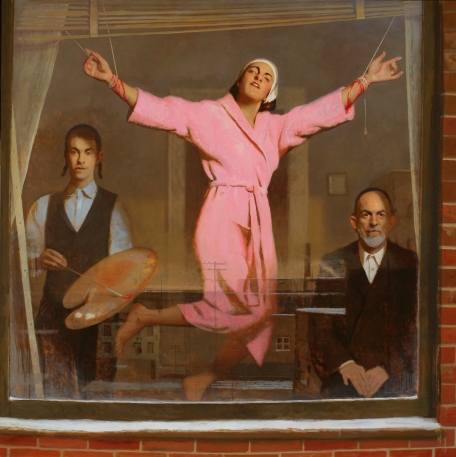 I have been surprised about how strongly people have responded to this little series on using feminine language to talk about God. I want to make clear the audience I have in mind. I am talking to people that either haven’t really thought about this before, or feel a little weird about it but don’t have a strong opposition to it. If you believe that this is actually wrong, sinful, and deeply unfaithful to the nature of God, then these posts probably aren’t for you. We’d have to go much deeper into a theology of Scripture, Sexuality, Humanity, and Gender. I may do that another time, but not right now. Today, I want to talk about the way our language about God speaks to gender and some history of how we use gendered language.

For the longest time, the way I would have defended masculine language for God would be with an appeal to the idea of “headship”. This is the idea that different systems and ways of human relating have people that “head” them–like a “head” of State, for example. And as the “head”, this leader stands as the representative for everyone they lead and care for.

Conservatives on this issue (as I used to be) believe that husbands act as the “head” of their family unit, including their wives. Most of these conservatives would be the first to tell you that this does not mean that women in general should see men as their “heads” in general. And yet, there is still this idea that “maleness” serves as the “head” of “femaleness”. In other words, “maleness” serves as the representation of all humanity, whereas “femaleness” does.

Therefore (so the thinking goes), if we want to talk of God in a way that represents the fullness of his relational personal-ness, we should speak in masculine terms, not feminine. We can still talk of God “Him”-self having some “feminine” traits (tenderness, mercy, desire), but we can’t speak of God “Her”-self having “masculine” traits (justice, wrath, protection). That simply doesn’t compute in this view. Elizabeth Johnson talks about the effect of this:

This state of affairs has a profound impact on women’s religious identity. It does not point to the equal participation of women and men in the divine ground. Rather, women can participate in likeness to God only by abstracting themselves from their concrete, bodily reality. This sets up a largely unconscious dynamic that alienates women from their own goodness and power at the same time that it reinforces dependency upon men and male authority…. Caught in this dualistic way of thinking that results in real differences in power, women have unequal say in shaping a community’s cultural institutions, laws, and symbols.

Throughout history, we see the negative effects of a Church whose practices, theology, symbols, emphases, and cultural engagement are dominated by the views of men exclusively. The way we talk about God may not be the source of this problem, but it certainly plays a role in justifying it.

If we conceive of a God who is more-or-less a male who may have “some feminine traits”, then we ultimately leave women out of the equation. Women can only participate in experiencing the Divine by going “through” a man. They can only mirror part of who God is, and a “lesser” part at that. Men, though, are told they reflect a full divine Image.

One commenter on my earlier post said with a straight face that women experience redemption by Jesus precisely because he is a male acting as the rescuer of women. Just think of how this view, over millennia can shape and form how women see themselves in the Church! A female Messiah would have been insufficient to redeem them. Femininity is lacking in some way. It needs masculinity to know and be saved by God.

A friend of mine (a woman) said that she didn’t see a problem with masculine language for God. She said that if someone walked into a mixed-gender group and said, “Hey guys!”, she would know that she was included. But if someone walked in and said “Hey ladies!”, the men would feel left out. She was arguing that feminine  language is more exclusive than male language.

I have two thoughts on that. First, maybe women are able to go through the extra mental step of “translating” masculine language to include them. It doesn’t mean they should have to, and it doesn’t mean it doesn’t subtly–unconsciously, even–affect women’s theological self-image over time.

Secondly, men have to do that same “translation” process when they are referred to as the Bride of Christ. I am fine with both genders having to do that “translating” work as we engage with God. In fact, I think it’s healthy. I have said repeatedly that I am not trying to de-gender God-language or imagery. I am not saying that masculine language is “wrong” or needs to go away. I just think we need to expand our language so that both genders experience the full range of gendered language. Just because men are less used to experiencing feminine Divine language doesn’t mean they shouldn’t have to learn. Johnson again:

If women are created in the image of God, without qualification, then their human reality offers a suitable, even excellent metaphor for speaking about the divine mystery who remains always ever greater.

Outside of theology and the Bible, there is a whole world of history and experience that shows how our language works itself out in the real world over time. We even see it within the Biblical tradition. Just look at the Gospels. According to the order in which most scholars think they were written, Mark refers to God as “Father” only 4 times. Luke does so 15. Matthew 49, and John 109 times. As time went on, the “Father” tradition in Christianity got bigger and bigger and bigger, and increasingly more entrenched.

Further, look at Luke 15, where Jesus tells a few parables that depict God as a Redeemer looking for her lost ones. He first tells a parable about a Good Shepherd who leaves 99 of his sheep to look for the lost one. After that, he tells a story of a woman who spends all day cleaning her house looking for one lost coin. Two stories. Back to back. One depicts our redeeming God as a man doing “man’s work”. The other depicts God as a woman cleaning her house. And yet, how many churches, sermons, pieces of art, etc. celebrate God as “the Good Shepherd” while ignoring “the Good Homemaker”?

Why don’t we feel free to speak as Augustine did in one his sermons: “Holy Divinity has lost her money, and it is us!”

Also, just look at how we culturally treat gendered images. As Lynn Japinga points out:

A master is skillful or in charge; a mistress is an illicit sexual partner. A lord manages property; a lady has perfect manners and breeding , but does little more than drink tea. Sir is a term of respect; madam runs a brothel. Christians throughout history have considered the female and the feminine at best subordinate, and at worst, dangerous. They did not think they honored God by calling God Mother or Midwife.

Even when the Scripture uses feminine language, like describing God as a mother hen, the male-dominated church has twisted it into a masculine picture, like one famous hymn does: “Under his wings, I am safely abiding, there shall I hide till life’s trials are o-er.”

My point in all of this, is that maybe–just maybe–our preference for masculine images when speaking about God is more because of deeply entrenched cultural developments, assumptions, and biases–not because of a sober reflection on the Scriptures from within the context in which they were written. It seems to me that Christians have too often taken their masculine assumptions and then looked in Scripture to justify the views and intuitions they already have. A good example is this piece that one commenter sent my way. I’ll end with one last quote from Johnson:

[This use of feminine divine language] allows women’s reality to point toward divine mystery in as adequate and inadequate a way as male metaphors do. Women are capable as women of symbolizing the whole of the mystery of God, not merely an aspect or dimension. We reflect God not only as nurturing–although certainly that–but as powerful, taking initiative, creating-redeeming-saving, angry against injustice, and struggling with and victorious over the powers of this world. The full and still-developing historical reality of women is a source for female icons of the living God in all her fullness and strength. And women are blessed in the naming.

[image credit: “The Brooklyn Crucifixion” by Bo Bartlett as an illustration for Chaim Potok’s amazing book, “My Name is Aher Lev“]

One thought on “God & Her Glory {2}: How our Words & History Affect Women”