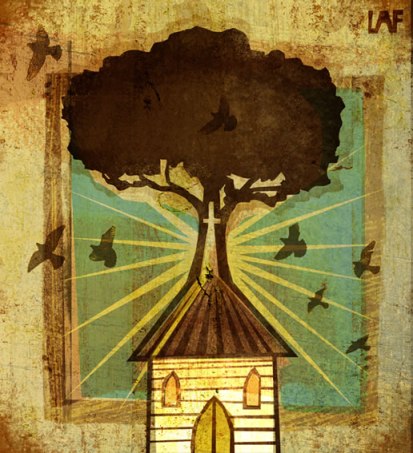 Yesterday, I posted some brief thoughts on liturgy and how it shapes us.  Those words were primarily taken from a document I wrote up a few years ago to train those leading liturgy. Today, I wanted to post another little section from that piece, going through an extremely brief history of liturgy in the Bible and how it developed in the early church.

Liturgy in the Bible

We see fairly early on that God intends for there to be a definite pattern or shape to worship among his people. He spends chapter after chapter talking about both the space and structure of the worship of the Israelite people in both the Tabernacle and the Temple. This continues in the Jewish community even today.

But at this point in the story of the Bible, the fullness of all that God will do to bring about our worship is incomplete, and so this worship is merely anticipatory of something that is to come. But throughout the Bible we get glimpses of a definite pattern to how God relates to his people–to how this story will eventually look in it fullness. This story–this pattern–is what forms the structure of our liturgy even today.

Throughout the Bible, repetition of form and phrases is used to shape the people of God. In the Psalms, the same phrases are used over and over again in the music. In the Old Testament, verses from other parts of it are meditated upon and repeated for worship.

In the Gospels, Jesus goes to participate in the liturgy of the synagogue, and during the established “Prophet reading time” he declares that he has now fulfilled this particular part of the liturgy’s story. At the Last Supper, he commands his disciples to repeat this meal in “remembrance” of him. In Gethsemane, after Jesus finds his disciples sleeping, it says he goes back and prays “the same thing” again, apparently using repetition to cry out to his God in this moment of greatest need.

Once the completion of the story finally came in Jesus, the people of God’s New Covenant spent time meditating on the implications of this on how they’d done worship for hundreds of years. They saw that formal time of “worship” was no longer something done on behalf of God’s people, but now a story and proclamation that God intended for his people to participate in and be changed by.

Without a complete, finalized Bible, the early church began with Jesus’ command to repeat his Eucharistic meal and then built off of that. This is why each week we are reminded that the Eucharist is the climax of our worship. It is what the entire Christian worship service was originally founded upon and based around.

The Last Supper (as we call it) was actually, at the time, a Passover Meal in which Jesus and the disciples were engaging. So, it makes sense that the early church looked to the Feast of Passover as its earliest source for the structure around this New Covenant meal.

The Passover Meal has four main parts to it.

Within (roughly) 20 to 30 years after it seems the final list of Bible books was being recognized as the official Christian Scriptures (mid-300s), we find the oldest known complete liturgy, known as the Clementine Liturgy. It is surprisingly similar to what we do today in many churches (especially my own).

This close connection between the formation of Scripture and Liturgy shows just how important Scripture was to the development of Liturgy, and it has held an essential place in Christian liturgy ever since.

The early church had a growing conviction that Liturgy was an essential component of Christian Worship, but not only for theological reasons. Practical considerations played a huge part. Even when there was a Christian Bible now established, the common person could not read it. Further, as Christianity spread, there was a growing chance that the service would take place in a language you did not understand.

Liturgy, then, became the primary vehicle for God’s worship and proclaiming the Gospel story. By having people participate in these movements of worship, they were able to preach the Gospel to all five of their senses, regardless of their mere intellectual understanding of the content of the sermon, or even the Scripture.

Since then, Christian Liturgy has been freely experimented with, changed, altered, made more or less formal, and re-articulated–but the same basic story is told in all liturgies.

The Story as Told in Liturgy

God has created. In this creating act, he has made humans for the purpose of worshipping Him and finding their truest expression of their humanity and “creatureliness” in this worship. As his creatures, he has both the right and responsibility to declare how human life is meant to be lived, and so he calls us to worship Him. We respond as the first humans did and sing songs of praise.

But God tells us that we are limited. And because of this, there are bounds that, if crossed, actually diminish rather than grow our humanity. And when this “Law” comes, it betrays that we have fallen short, and so God graciously calls us to the confession of our sins, and upon opening our mouths, forming the names our sins with our lips, and letting them fall, God does not respond with wrath, but rather peace and a declaration of forgiveness. We are made right with God and so we sing once more as the unified and forgiven people of God. We then celebrate this peace by passing it on to those around us.

Then, as the forgiven and pure children of God we gather around at the feet of our Father to hear him speak. Scripture is read and people that God has appointed help us understand it through a sermon. Having heard and understood our Father’s words to us, we all re-affirm our faith in light of this through a confession of faith.

We are then, as the forgiven and unified people of God invited to come to his table and commune with him and one another. In light of this invitation, we respond with a Prayer of Thanksgiving. At this, the representative among us of Jesus as our High Priest says the Words of Institution which invite God to make these simple elements no longer merely simple elements but transformative instruments through which God reveals Himself to his people. And then we come. And we eat. And we receive communion. We then respond to God’s giving of all of Himself in communion by offering of what he’s given us materially.

At the end of our time, a blessing is prayed over us in a concluding prayer and then a benediction (literally, a “good word”) is prayed over us, sending us out to continue being the forgiven, unified, and worshipful people of God to the world outside.

One thought on “A Brief History of Liturgy (for those interested)”