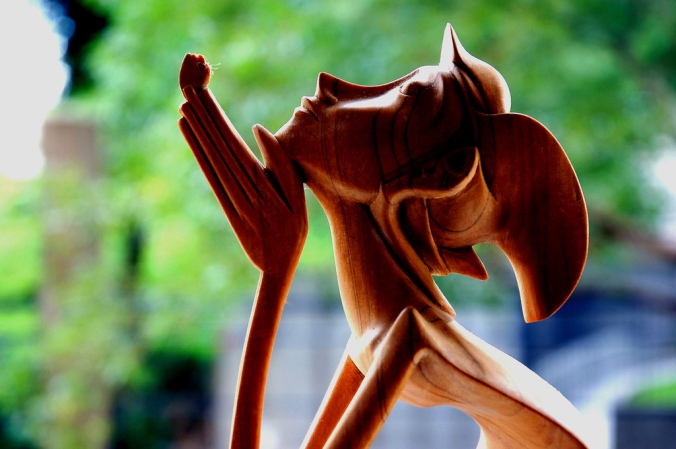 {abstract: “Praying in tongues” is not really a “gift”, but rather a way in which God makes Himself known, and we commune with Him. Therefore, I believe it’s open to all of us, not just those with a “gift”. It is a sacramental, physical participation in the “real presence” of God praying within you. It may very well be random and not a “real heavenly language”, but nevertheless, God is sacramentally mediated to us in it. I conclude by offering some brief practical encouragements.}

Last week, I started writing some posts in response to a New York Times piece about research concerning the practice of talking in tongues. I wrote about how this piece reminded me of my own charismatic side and how I’ve been neglecting it. I then talked about my views concerning the use of tongues in a corporate Sunday church context. Today, I want to give people a realistic and (hopefully) sensible framework for understanding the private use of praying in tongues.

tongues is a “gift”?

Holy Spirit “gifts” are not little “tokens” that God gives us to exercise as we want, but are ministries and movements of the Holy Spirit in which we’re invited to partake. They are, as 1 Corinthians 12 calls them, “manifestations of the Spirit”. They are ways that the Spirit moves among the People of God; ways that these people are invited to participate in at various moments, times, and seasons of life.

In this sense, then, no one “has” a gift of tongues that they wield whenever they want. The Holy Spirit has (in a sense) a “ministry of tongues” that he invites people to participate in. The Spirit also has “ministries” (or more precisely, “administrations”) of prophecy, words of wisdom, healing, etc. These are movements of the Spirit that we partake in–not things given to us with a responsibility to use. Does that distinction make sense?

The Greek word for “spiritual gift” is more accurately translated “gift of grace” or “gracious gift”. Historically, it’s described as “any good gift that flows from God’s love to humans.”

tongues is a “prayer language”?

Most groups that speak in tongues describe tongues as a “prayer language” that the Holy Spirit is speaking in and through the believer. It isn’t random, it’s not made up, and the language itself is not something they are controlling. In fact, neurological research from the University of Pennsylvania here in Philly supports this:

Our brain imaging research shows us that these subjects are not in control of the usual language centers during this activity, which is consistent with their description of a lack of intentional control while speaking in tongues…. These findings could be interpreted as the subject’s sense of self being taken over by something else. We, scientifically, assume it’s being taken over by another part of the brain, but we couldn’t see, in this imaging study, where this took place.

This perspective that tongues is an actual heavenly language is not explicitly spelled out in the Bible. There are hints to this, as the same Spirit which inspires these tongues “interprets” or “translates” them for the hearers. But opinions differ. Even one of my Dutch Reformed heroes, Abraham Kuyper holds that it is a “heavenly language” and most certainly not another human language nor random syllables. Instead, he thinks that it is a return to our “pre-Babel” language and ability to speak purely the words of the Spirit. It is an undoing of sin’s effect on language.

But ultimately, though we have hints and conjecture throughout Scripture, this “heavenly language” idea has mainly come from tradition and personal experiences passed down through the millennia. What adds to the power of this belief is the experience that each person’s private experience of tongues is different–each one’s “prayer language” is unique. And so it feels profoundly intimate as this is a “language” reserved for just the individual believer and God.

I will admit, I don’t know whether or not I can say for sure I think there’s a specific “heavenly language” being spoken in those moments, but I can say this: when I first started praying tongues, I admit, I was simply mirroring the sounds I heard one of our elders making when he did it.

But then, after a few weeks, a few syllables and sounds started sticking out and repeating themselves. I further relaxed my tongue and mouth and I allowed newer, different sounds to come out. And over the years, though it sounds crazy, I know, there almost has developed a consistent “vocabulary”, “grammar” and “syntax”. And also, as time has gone on, I have grown a “sense” of what I’m saying, even though I don’t know the specific words. I feel I can “direct” these tongues toward certain things, and even think I have gained insight into the meanings of some of the words themselves.

I know it’s weird, but it’s what I seem to feel.

And yet, I can’t say that what I “feel” is the truest truth of cosmic reality. I know very well that I could be making certain noises more from muscle memory than any heavenly syntax being pushed through my lips. I am fully prepared to die and meet God and have Him look at me and say, “yeah, you were just talking gibberish; it didn’t actually mean anything in the moment.” And this may very well be the case!

Even if this is the case, I still find tongue-praying of great use, beauty, and nourishment for my soul. And I still invite everyone into this experience.

You see, there is this definite, clear idea in Scripture that the Holy Spirit within us experiences the weight of this world alongside us, groans with us longing for redemption, and even intercedes for us on our behalf from within us. And this prayer from within is said to take place with “sighs too deep for words”. Paul’s words in 1 Corinthians about his personal prayer in tongues seem to mirror this sentiment of praying using the Spirit within him (though yes, as has been pointed out by friends, there’s no explicit exegetical connection here).

Just like with other sacraments, it is (as N. T. Wright calls it) a “thin space” between the human and divine; a place in which God is there, moving, and acting, and we are invited, by some material, and physical way, to join in that and meet with him in it. It’s like God is dancing one set of steps in a dance and we are invited to join hands with him and join the rhythm.

In the same way that the bread and wine are just that: a random piece of bread and a random cup of wine, the noises coming out of my mouth may truly be random, non-sensical syllables, with nothing special in and of themselves. And yet, he meets us in it. He communes with us in the most intimate of ways. And it edifies us. Once again, the science demonstrates this:

Contrary to what may be a common perception, studies suggest that people who speak in tongues rarely suffer from mental problems. A recent study of nearly 1,000 evangelical Christians in England found that those who engaged in the practice were more emotionally stable than those who did not. (source)

When they are actually engaged in this whole very intense spiritual practice … their frontal lobes tend to go down in activity. … It is very consistent with the kind of experience they have, because they say that they’re not in charge. [They say] it’s the voice of God, it’s the spirit of God that is moving through them (source)

This study also showed a number of other changes in the brain, including those areas involved in emotions and establishing our sense of self. (source)

Let’s say these pieces of have piqued your interest. What should you do? First off, pray (without tongues)! Experience God’s presence “with understanding” as Paul puts it. Then, ask for the Holy Spirit to meet you in your own practice of tongues. And then, give it a try. While in an active, meditative state, just “go with it” while focusing your mind on God and the Spirit.

Does this sound crazy? Perhaps. But let me conclude by offering you these words from the good ol’ Reformed Anglican J. I. Packer, hardly someone that would be accused of being too wild on this front (from pages 5 and 6 of this pdf article):

Glossolalia [the precise theological term for speaking tongues] is not language in the ordinary sense…. It is, rather, a willed and welcomed vocal event in which, in a context of attention to religious realities, the tongue operates within one’s mood but apart from one’s mind in a way comparable to the fantasy-languages of children….

Though sometimes starting spontaneously in a person’s life, with or without attendant emotional excitement, glossolalia is regularly both taught (loosen jaw and tongue, speak nonsense-syllables, utter as praise to God the first sounds that come, etc.) and learned, and is in fact easy to do if one wants to.

Contrary to the sombre ideas of earlier investigators…. glossolalia argues no unbalance, mental disturbance or prior physical trauma. It can and does occur in folk so affected, [who] are persons of at least average psychological health, who have found that glossolalia is for them a kind of exalted fun before the Lord….

Glossolalia is sought and used as part of a quest for closer communion with God, and regularly proves beneficial at conscious level, bringing relief of tension, a certain inner exhilaration and a strengthening sense of God’s presence and blessing…..

Glossolalia represents, focuses and intensifies such awareness of divine reality as is brought to it; thus it becomes a natural means of voicing the mood of adoration, and it is not surprising that charismatics should call it their ‘prayer language’. As a voice of the heart, though not in the form of conceptual language, glossolalia, in Christianity as elsewhere, always ‘says’ something….

I pray (in and out of tongues, haha) that you all will explore this “spiritual playground” of sorts and see how you might be drawn all the more closer to our God and His Spirit. It’s an interesting road, but it’s one that could surely help us all, especially those of us in more highly liturgical church contexts.

How balanced, mature, and helpful might it be to have a people (and their leaders) submitting to the rhythms of ancient liturgy every week, sitting under the Creeds and the Eucharist, while also filling their lives with the dynamic, intimate, and passionate Presence of the Spirit, even in ways that defy all intellect and objective reasoning? If we can figure out how to marry these two worlds, I feel the Church, both personal and corporate, will be greatly benefited.

For further reading, check out this wonderful article at Grace Communion International.

[image credit: photo by petra** on flickr, who has amazing work you should check out. Since I got this picture under Creative Commons licensing, she seems to have taken it off her feed though it’s still floating around the internet. I’m using this under the previous license. If I have this wrong, or petra** herself runs across this and wants it down, please feel free to let me know.]

5 thoughts on “Charismatic Confessions, pt. 3: Praying in Tongues for Everyone!”