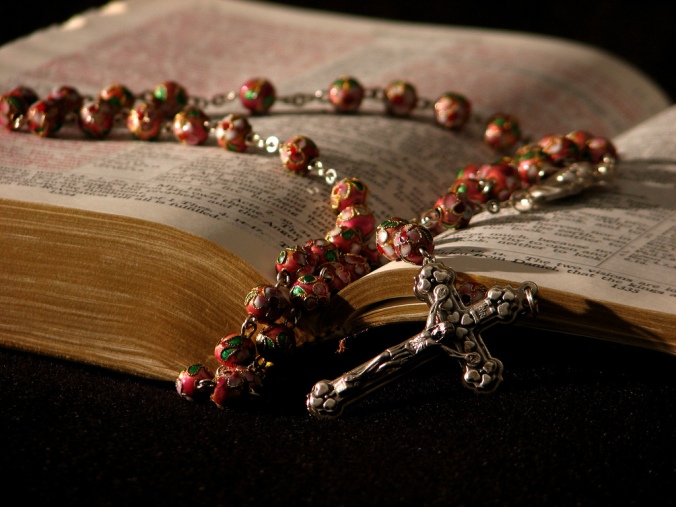 Oh, the Bible. It’s the lifeblood of the Church. It’s our backbone. But there’s so much we don’t get, and the culture both within and without the Protestant Church hasn’t helped. In its response to the Enlightenment, Evangelicals adopted the ground rules and assumptions that undergird modernism, namely, that Truth must be something that has a one-to-one correlation to things in created reality (as opposed to Ultimate Reality–God Himself), therefore making science and history the only vehicles for this Truth. This has caused so many problems with the rest of the world when talking about a little doctrine: Inerrancy which means, at its simplest level, that the Bible contains no “errors”. What does that mean?

Catholics can help us answer this.

I fear that Evangelicalism is becoming increasingly irrelevant to the current discussion on nearly every front because of these improper assumptions about Scripture. Catholics, though, were having these discussions in the Middle Ages! They have largely already dealt with the things that we Protestant are only now encountering issues with. This gave them a foundation that let them maintain intellectual and biblical credibility in light of the Enlightenment and now modernism. Here’s what they say about Scripture in the Catholic Catechism:

In order to reveal himself to men, in the condescension of his goodness God speaks to them in human words: “Indeed the words of God, expressed in the words of men, are in every way like human language, just as the Word of the eternal Father, when he took on himself the flesh of human weakness, became like men.”

And on the idea of Inspiration and Inerrancy, the Catechism says this (emphasis mine):

“To compose the sacred books, God chose certain men who, all the while he employed them in this task, made full use of their own faculties and powers so that, though he acted in them and by them, it was as true authors that they consigned to writing whatever he wanted written, and no more.”

“[We] acknowledge that the books of Scripture firmly, faithfully, and without error teach that truth which God, for the sake of our salvation, wished to see confided to the Sacred Scriptures.”

In Sacred Scripture, God speaks to man in a human way. To interpret Scripture correctly, the reader must be attentive to what the human authors truly wanted to affirm, and to what God wanted to reveal to us by their words.

In order to discover the sacred authors’ intention, the reader must take into account the conditions of their time and culture, the literary genres in use at that time, and the modes of feeling, speaking and narrating then current. “For the fact is that truth is differently presented and expressed in the various types of historical writing, in prophetical and poetical texts, and in other forms of literary expression.”

This has given the Catholic Church the freedom to fully embrace the findings of science, psychology, and other fields that Protestants have notoriously removed themselves from. Far too often American Evangelicalism, on the other hand, is far more satisfied with keeping its distance by staying in its safe suburbs, participating in single-party political radicalization, throwing money at the people that are actually “called” to do “that kind of work”, and insisting that people should just “have the freedom to fail and then pull themselves back up” (thank heavens God didn’t treat us that way!).

This also gives them a fuller idea of how God is made manifest in the mundane, leading them to be able to manifest God through the mundanity of their own lives in service of others: loving the poor, caring for the sick, and helping orphans. If your view of the Bible is as an object far from God in which he just deposited knowledge, then that’s how you will engage the world–as a far object that just lobs spiritual “truths” at people. But, if you believe that God actually came, inhabited, and incarnated Himself into the messiness of this world in both Word and Deed such that He might communicate Himself to people and bring redemption, then, perhaps, you might find the freedom, joy, and satisfaction that comes from pouring your life out in love for others.

Catholics can help us. We would do well to listen. They have been modeling it to us for hundreds of years. We can debate their various interpretations of texts and doctrines, of which I disagree with many, but I don’t think it would benefit us to ignore their basic views toward Scripture, in fact, doing that has already hurt us greatly. I’ll leave with this last quote from the Catechism that summarizes all of this so beautifully:

Still, the Christian faith is not a “religion of the book.” Christianity is the religion of the “Word” of God, a word which is “not a written and mute word, but the Word is incarnate and living”. If the Scriptures are not to remain a dead letter, Christ, the eternal Word of the living God, must, through the Holy Spirit, “open [our] minds to understand the Scriptures.”

Holy Spirit, open our minds to view Your Word rightly.

8 thoughts on “Catholics on Scripture and Inerrancy”